Home / Hair Loss / Are you going bald or is it your natural hairline? Find out here.

Are you going bald or is it your natural hairline? Find out here.

I have a feeling that this has happened to a lot of men out there. One day, just like any other day, I looked at myself in the mirror and suddenly noticed that my scalp was more visible in the front. It seemed like it had been happening for a little while now, but I was probably not paying attention to it. I asked myself, “Are you going bald or is it your natural hairline?”

Quickly, I searched for pictures of my younger self to compare. And sure enough, my hairline used to have rounded edges but now was slightly higher up and less defined.

I must admit that, since I noticed it, this is all I can see when I look at myself in the mirror. I’m 32 years young and my dad, in his 60’s, has a head full of hair. So, I never really thought I would lose mine. It might sound vain, but I don’t see how I can feel comfortable with my looks if I lose my hair…

I started looking for answers and I sent a picture to my bald uncle. He gave me a little hope by laughing and exclaiming: “Relax man, it’s not hair loss, it’s just a mature hairline.”

Mature hairline? What is that? 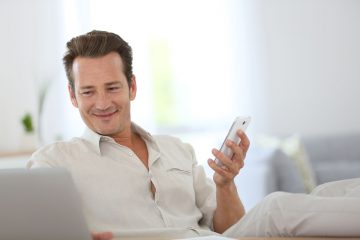 At that moment, I had no idea what my uncle meant, so I did some research.

A mature hairline can start in your teenage years. It can happen to anyone and does not depend on a genetic predisposition. It’s estimated that 95% of Caucasian males will develop a mature hairline. It can happen anywhere between the ages of 17 and 29. Only a small percentage of Caucasian men, around 5%, retain their juvenile hairlines for life. When the hairline is maturing, you will probably have high corners that are not really thinning but are completely bald. Your hairline forms that V shape we commonly see on “mature” men.

You may also be interested in: Am I Suffering from Hair Loss?

On the other hand, thinning hair, or androgenic alopecia, can start at any age. And it affects up to 70% of men and 40% of women during their lifetimes. If your hair is thinning, the hair on the crown and temples starts falling out and leaving you with little hair on the entire hairline, from ear to ear.

I also found an interesting fact: when thinning can be spotted easily, then you have already lost 50% of it on that area!

Is a maturing hairline a sign of male pattern baldness? A mature hair line is not always a sign of hair loss. When you are young, it is normal to get a mature hair line, while male pattern baldness usually forms as you age. Basically, the difference is the distance that the hairline has receded.

Typically, in a maturing hairline, the entire line recedes about 1-1.5cm above from your natural juvenile hairline or your forehead’s highest wrinkle (I bet you are measuring yours now just as I did). When the issue is hair loss, the hairline will recede further that 1.5cm and will show on the temple and/or side areas.

After learning the differences, I sadly realized that my hair is thinning, which is just a nicer way to say I am losing hair. I am not sure how I really feel about it, but I know that the sooner I face it the better chances I have to reverse or stop it.

The good news, as I said, is that I have a lot of options nowadays to protect and restore my hair. From invasive to noninvasive solutions as well as different methods to measure and track the amount of hair loss.

Whatever your case might be, whatever the issue is, knowing and treating it early is key. If it bothers you like it bothers me, it’s enough reason to take action!